Ethernet services offer guaranteed bandwidth, Customers will often use speed test sites to test throughput performance, but whilst Ethernet service bandwidth from Jola is guaranteed, there are differences between the circuit size that the customer purchases and a speed test will display to the end-user.

There are a number of factors to consider:

> Ethernet headers and protocol overheads – these include Data Link headers, Physical ‘on the wire’ headers, as well as UDP/TCP/Ethernet protocol overheads. The bandwidth used by these headers is not usually represented in a throughput performance test. Due to these headers and overheads using a proportion of the bandwidth, any tests completed on a live customer network will be expected to show a lower throughput than the full circuit size. The throughput value presented to the end client after protocol overheads have been removed (i.e. TCP/ UDP/Ethernet) is known as goodput. As an example, we can expect a maximum goodput of approximately 950Mbps for TCP on a 1 Gb circuit.

> CPE throughput performance – CPE suitability to the circuit size and customer use is vital, and this is the same for any networking devices in the chain. For example, if the network at the customer’s site has a Router > Firewall > Switch > Laptop and all devices are 1Gb capable except for the switch, then the maximum a throughput test would show on the laptop would be limited to how well the switch performs. Even for 1Gb capable networking devices, there will be limits to performance capability, so it is important to specify all networking equipment to the customer’s requirements.

Below are the guidelines on how to perform IPERF tests on Dedicated Internet Access (DIA) services, which include Fibre Ethernet, EoFTTC/GEA, and EFM. The results will be an approximate representation of the throughput on the P2P link (customer site to Jola Network) Ethernet service provided by Jola.

Make sure only one laptop is connected directly to the suppliers managed router.

This should have reasonable specifications;
1. At least dual-core @ 1.60GHz with 8Gig of Ram as a baseline.
2. Any security/restrictive features like firewall that would affect the test
3. Wi-Fi should be disabled during testing.
4. Network Card set to Auto/Auto however, this can be altered to get the best testing environment for maximum performance during testing.
5. For services providing over 100Mb/s, the network card should be capable of 1Gb/s speeds. The Laptop will be configured with an IP address

From the Customer’s public IP range provided by Jola, the default gateway will be the router LAN interface IP address; DNS IPs will be Jola’s or google public DNS.

Note: For Wires-Only services, the laptop will be connected directly to the Customer’s CPE (router) or direct to the NTU where applicable.

Follow the instructions to install and launch the application, you should get a GUI interface similar to the below when the install has completed:

Just press ‘Run Iperf3’ at the top right to run an upload test, when completed hit the ‘Save’ button and save the output. You might change the file name slightly to mark it as the upload test. 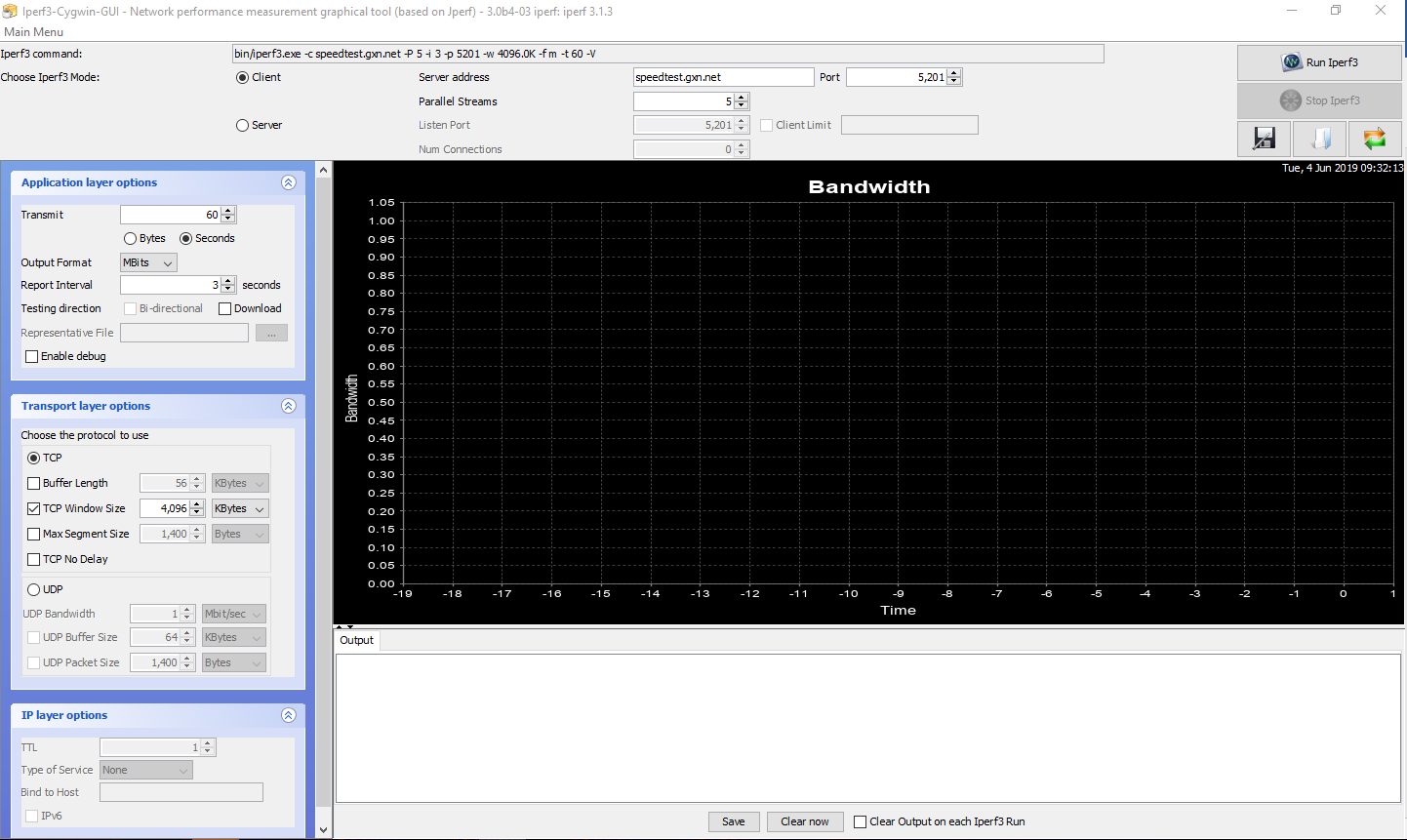 Note: it might look like nothing is happening; just wait a few minutes for the test to complete. 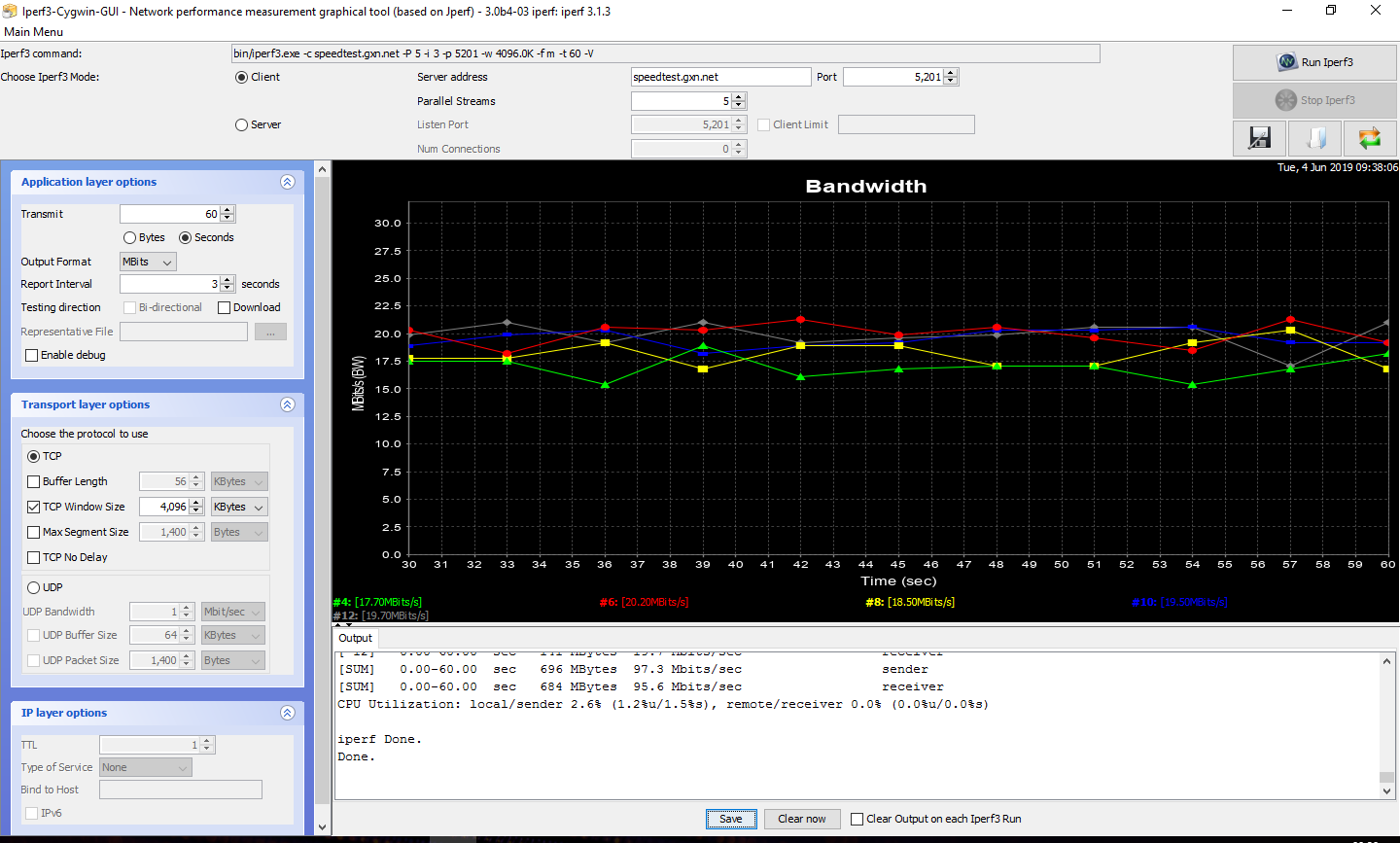 Then hit ‘Clear now’ to remove the existing output.

After clearing the previous test, tick ‘Download’ checkbox under ‘Testing direction’ and run the test by pressing ‘Run Iperf3’ button again; save the second test as a download result.

NOTE: In some instances (mainly on bigger circuits over 200Mb/s) you might see very low downstream speeds compared to the upstream, this might be caused by testing laptop not being up to speed with the IPERF server. In such cases increase the number of stream by a value of five and retest, if the results do not improve by 20 streams then there is most likely to be a problem with the circuit.

Run two web-based speed tests from each of the links https://www.nperf.com/ and www.supportal-test.co.uk capture and save screen shots of both tests. You can change the remote testing servers during the test to get the best results (optional)

Run a traceroute to the internet and send us the results. Preferably to public DNS IP 8.8.8.8

Send all the results above to Support@jola.co.uk quoting any case references of previous tickets